During November, we aim to bring Mouth Cancer to everyone’s attention. The dental profession, led by the Oral Health Foundation, promotes mouth cancer awareness with a number of initiatives. The Houses of Parliament hosted one event, in the fabulous Churchill Room

Those personally effected by mouth cancer, attended the event. This included Members of Parliament, the dental and wider health profession and supporters and campaigners of mouth cancer action. Everyone added their collective voice to the ongoing fight against one of the UK’s most increasingly prominent cancers. 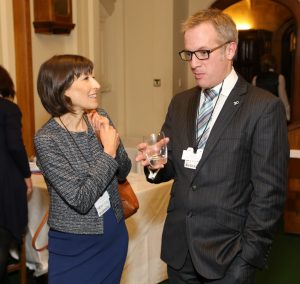 Dr Ben Atkins with Tracy Posner, Managing Director of Positive Communications and a fellow Trustee of the Oral Health Foundation

Keynote speaker was Professor Michael Lewis PhD, Dean of the School of Dentistry at Cardiff University. He drew attention to the emerging trends in mouth cancer, including the growing evidence that more women and younger people being diagnosed with the disease.

Just this week, the British Dental Association has been highlighting new figures from Cancer Research UK. These show that rates of mouth cancer have risen by 68% in the last 20 years.

This report received wide coverage in the media. The Mirror focused on the impact of Smoking and Alcohol. The Sun looked at the impact of Oral Sex.

So that’s easy to joke about, isn’t it? But both these popular newspapers are getting the message across to millions of readers. And they are doing it in a way that is easily understood. Reaching as many people as possible during the month is the whole aim of the campaign. So well done to these tabloids for making a cracking contribution!

Well done also to Mouth Cancer Action Month Sponsor Denplan and our other sponsors and supporters Dentists’ Provident and the Association of Dental Groups.

You can read even more about the event on the mouthcancer.org website

There are no comments.